The first of our popular Manor Memories series for some time comes from a player that many would regard as one of the best all-round cricketers ever to play for Worthing CC. A fixture in the 1st team for 20 years (many as captain) he is out on his own as the club’s all-time leading wicket-taker at that level, but can also count a league hundred and numerous half centuries to his name. He was a fine fielder too, whether in the slips or out in the deep, but it was undoubtedly his bowling that will be remembered as his strongest suit. Despite barely reaching medium pace, he would feature highly on many a batsman’s list of most challenging league bowlers to face.

You began your club career at Shoreham CC, what prompted you to come to Worthing?

I played Sussex Under 19s with Alastair Shackman, who was the 1st XI and Sussex U19 wicketkeeper at the time. Shoreham was a great club in the Championship League (the one below the Invitation League) with no prospect of going up a league due to their ground being Buckingham Park, infamous in the local circuit. I actually took a year out from club cricket and joined Worthing after that; I kind of regret taking that year out actually, but no point dwelling on it!

What do you remember about your Worthing debut?

I was due to play in the 2nd XI apparently but a guy I went to school with, James Martin, had to pull out and recommended me to take his place. We were away at Haywards Heath and I think we drew. I batted at four or five and got 6 before driving one down mid-off’s throat and then bowled 10 overs, none for 21 against a formidable batting line-up that I was oblivious to. Tim Dunn tells me that he said to Dave Renham (the skipper), “I hope he swings it”, which I fortunately did at the time. It was an interesting experience and I remember thinking that a certain Anthony Aduhene was a rather loud, if (kind of?) entertaining individual!

You appear in a lot of “best ever” lists, predominantly for your prowess with the ball. As a bowler of reasonably gentle medium pace this is no mean feat; what other skills did you need to develop instead?

Yes, indeed. This is clearly very flattering but had I played at Horsham I doubt my career would have lasted too long. I was in the Sussex Under 19s as a batsman who bowled occcasionally, but I became the opposite at Worthing, which was fair enough as the top order at the club was pretty strong at the time, as were the pacey seamers. I developed a leg-cutter, more by luck than judgement although I learned to control it evenutally and Clappy shortened my levers which gave me an extra inch or two of pace, but my modus operandi was essentially to annoy a batsman out, a mantra that seeped in most aspects of my game to be honest. 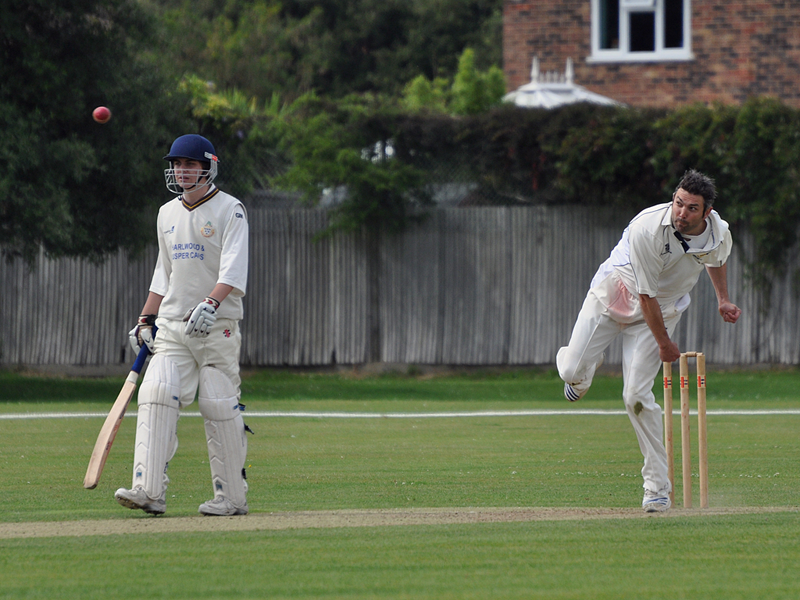 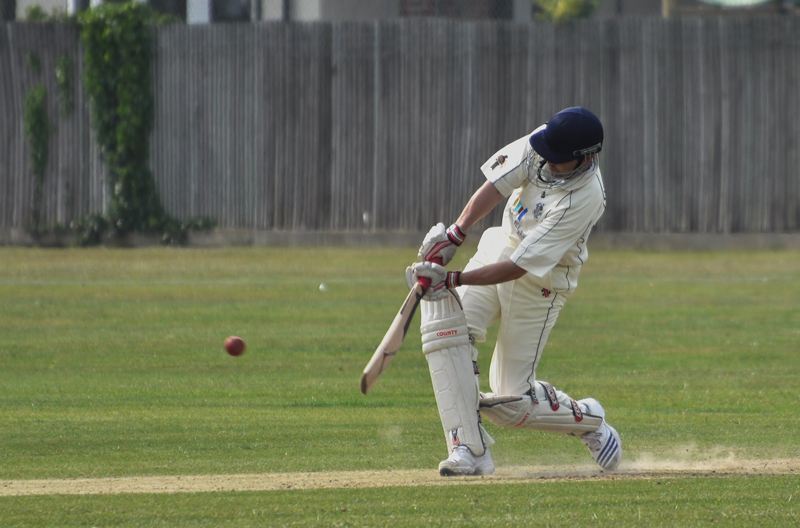 My favourite game, and my memory is terrible regarding this stuff, was when we beat Horsham in the cup. Horsham had a line-up including future Australian international David Hussey and Sussex legend Chris Nash amongst other league superstars. Ben Cameron and I put on a few runs on a slow wicket and I commentated my innings for Hussey who wasn’t overly keen on my thoughts if truth be told. I was caught on the boundary (a worldy catch; full length dive etc) off Mark Nash with about twenty required off not many overs to leave John Kaye, who passed me with the immortal sarcastic words “cheers mate”, before taking us over the line. We didn’t beat Horsham that often so this really meant something.

In truth there are loads of memorable games: Casey Lee’s innings against Bexhill really standing out as being a precious victory to save the season; my league century against Preston Nomads and my 9 wickets against Brighton Hove are also memorable, but they were drawn games.

Who were your favourite team-mates and why?

The honest truth is that I have enjoyed the company of pretty much everyone I have played with. John Kaye and I formed a formidable partnership and I can attribute many of my wickets to his glovework. Tim Dunn was always a great guy to have in the team and you knew exactly what you’d get from him with the bat (and in the field!). The likes of Chris Mansell, Alex Harris, Ben Shelford, Pedro Venus and many others have formed loads of great memories. I feel genuinely lucky to have played with so many talented and decent guys at Worthing; far too many to name in this.

The best I have played with was Ben Cameron, a terrific and very focused batsman; and I say this despite him saying that I would only make D grade in Oz (he later claimed he was trying to gee me up; yeah right)! He’d be very closely followed by Blayne Cornford, another great batter and bloke as well as Kyle Bowes whose Yorker worried many a batsman’s toes!

The best I’ve played against were from Chichester and Stirlands. Fazl-e-Akbar, a seamer who barely tried most weeks but was still far too good for most, including me. The other one was Adam Zampa who tied me in knots with his googly. Pakistan spinner Saeed Ajmal was decent too, from Stirlands.

Best English amateurs you played with and against?

The locals I’ve played with would include John Kaye, whose wicketkeeping was phenomenal and doubled my wicket tally; he was also the best captain I played under as he has a photographic memory for a batsman’s weak points. Iain Burstow was an excellent player with bat or ball in hand; we never really gave him the opportunity with the bat in truth be told! Dan Barton and Anthony Aduhene could make the ball talk on their day too. In the twilight of my career Benn Challen has to be up there as does Luke Vinter; both are wily cricketers who could never be taken lightly when playing against them.

Those I’ve played against would have to include Darren Stevens who used to plonk me in the car park four balls an over yet JK still put me on to bowl against him! Chris Mole was always a prized wicket too, if only so you didn’t have to listen to him in the middle. Robin Martin-Jenkins was a cut above (and a decent bloke) but again there have been so many as the Sussex League has been a very high standard over my career.

There have been many as I am old and have played a lot of games, but Alex Harris dropping a catch off me and getting hit in the nether reasons has to be up there; there were actually six catches dropped off me in that game which could lead to another story. There was also the game at Three Bridges when Steve Pearse dropped a catch off me whilst careering backwards; the ball never left the 30-yard circle yet the batsmen still ran three due to people laughing at Pearsey’s failed attempt. There was always Bexhill when Kev Punter got injured and Tim was wearing his shades in the dark also sticks in the mind, but this is a family show. And I haven’t forgotten the nights out in Worthing with Justin Watts and Paul Westlake but they are for a different website feature.

Best memories off the field?

The socials at the club have always been good value, particularly the Legends of Rock (JK’s idea I think). Dave Marshallsay’s (Barry Chuckle’s) “That’s Not My Name” was brilliant as was Alex Harris and Casey Lee’s “Danger! High Voltage”. I also still giggle at the crossword clue “to egg on, five letters” that JK used to get every new player with.

Anything else regarding Worthing CC?

I know this sounds cheesy but I have remained at the club for so purely because of the people; we have worked so hard at making the club such a welcoming and friendly place in my time there (I’m not sure if I helped in this regard) and it has worked in my view. From the scorers and umpires, to the ladies who do the food in the evening, to the committee members who do all the dreary jobs and dull paperwork (it’s not dull to everyone though, is it Adrian [I truly consider it an honour – ed]), to those who get the players on the pitch each week, the club is an example to others. I have (unfairly?) got a reputation for moaning a little bit (understatement?) but you will struggle to find a better cricket club in Sussex in my view; however, I’m biased. 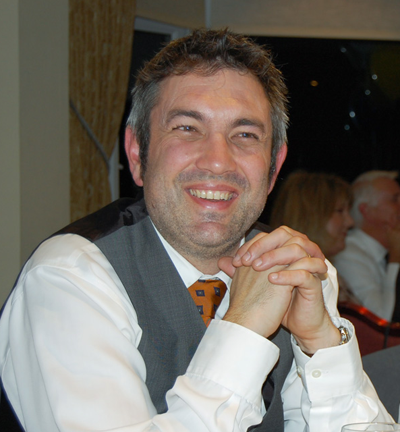 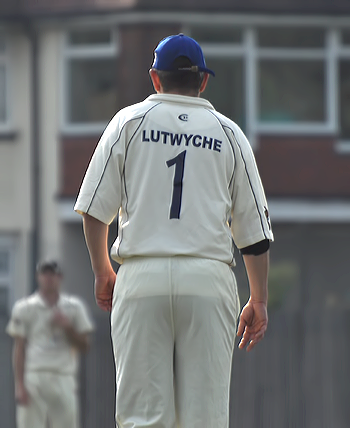 JK
13th August, 2021 at 3:58 pm
Thanks for the nice words Lutters. It was a pleasure to witness your skills from the “best seat in the house” for most of those 20 years. I also remember a few big partnerships in the middle order – listening to the batting commentary and countless bowlers getting quieter and quieter as they ended on the losing side of the exchange. The answer to the crossword question (too egg on) is of course?

Craig Mueller
2nd Sept, 2021 at 1:28 pm
Well done Lutters was a great experience playing with you when I was in the UK!
Glad too that some “off field” memories weren’t recalled!
Congratulations again mate, great career!!

Ian Farrell
2nd Sept, 2021 at 2:43 pm
To have a great club like Worthing requires characters like Lutters. Always a bit in the pitch at the Manor Ground, no better bowler than Lutters to exploit it.

Brendan Quirke
2nd Sept, 2021 at 7:54 pm
That was great to read Andy. Well done.
I always enjoyed the atmosphere at the club when Ryan played.
Everybody was so friendly.

Blayne
2nd Sept, 2021 at 10:03 pm
True legend of Worthing is Lutters!
I had the time of my life in 2005 playing with the likes of you and some of the other fine specimens listed above – and you deserve all the plaudits that come your way?. Even if you contribute to most of them

Luke Vinter
3rd Sept, 2021 at 7:23 am
Thanks for the mention. “Wily” – I’ll take that! Club legend and a pleasure to play with, even if I had to continually watch you hitting the “ridge” while I barely moved it off the straight. Great memories of the 2011 promotion season (excluding the last game) where we both seemed to bowl far too many 10-15 over spells but it seemed to work. If there were paying spectators they might have been asking for their money back though.

Richard Jackson
6th Sept, 2021 at 6:52 pm
A great read! Although playing league cricket in sussex is now 15 years ago for me as I’m now in Leicestershire and can still hear Aduhene as he is only over the border in Notts! 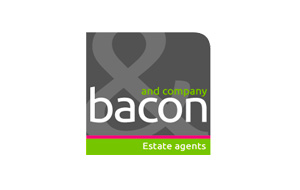